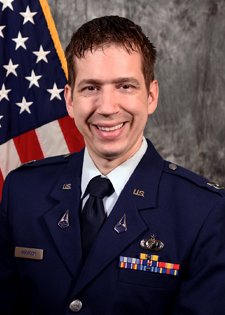 Captain Sean Mochocki is currently an instructor in the School of Systems & Logistics at the Air Force Institute of Technology where he is teaching and developing courses on Enterprise Architecture and Life Cycle Risk Management. He was formerly a Computer Science Master’s student in the Air Force Institute of Technology, graduating in March of 2020. He transferred to the United States Space Force on June 7th, 2021.

During his first assignment at Cape Canaveral Air Force Station, Captain Mochocki served as a Responsible Engineer in the Atlas V flight, providing the critical mission assurance function to make sure that DoD assets successfully completed their journeys to their proper orbits. As part of the 45th Launch Support Squadron, Captain Mochocki was the SpaceX Flight Mission Lead for the Evolving Launch Vehicles Flight, providing situational awareness of SpaceX operations to senior leadership, and assisted in cultivating the critical relationship between SpaceX and the 45th Space Wing.

Capt Mochocki was the lead engineer for the Communications Integrated Product Team Joint Surveillance Targeting & Attack Radar System (JSTARS) Recapitalization Division in the Air Force Materiel Command in his second assignment. He was responsible for system risk assessment and decision analysis for a seventeen aircraft fleet estimated at $22B for its life cycle. Capt Mochocki was also a key liaison to the Army and USMC to ensure user requirement fulfillment with the delivered weapon system.