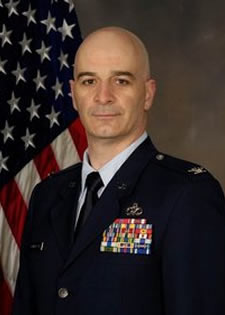 He was commissioned as an officer in 1991, after graduating with a Bachelor of Science degree in Civil Engineering from Worcester Polytechnic Institute. In 1996, he completed a Master of Science degree in Environmental Management from West Coast University. He earned his Doctor of Philosophy in Civil Engineering from the Ohio State University in 2009.

He graduated from Squadron Officer School in 1997, completed Air Command and Staff College, and Air War College in 2004 and 2009, respectively.

Colonel Cotellesso began his civil engineering career at Vandenberg Air Force Base, California, where he served as a project manager, Readiness Flight, Commander, and SABER Chief. In 1994, he was deployed as the Officer-in-Charge of a 65 person Prime BEEF team to Operation Provide COMFORT, Incirlik Air Base Turkey. In 1995, he was transferred to Eielson Air Force Base, Alaska where he served as Chief, Environmental Contracts and Chief, Maintenance Engineer. In 1996, he deployed to Suwon Air Base, South Korea as the Officer-in-Charge of an advanced team planning a major theater bed down exercise.

In 1999, Colonel Cotellesso was assigned to Headquarters Air Force Materiel Command, Directorate of the Command Civil Engineer at Wright-Patterson Air Force Base, Ohio where he worked in the Readiness Branch as the Civil Engineer Vehicle Manager and the Housing Branch as Dormitory Program Manager. In 2001, he was deployed as the Base Civil Engineer, Ali Al Salem Air Base, Kuwait in support of Operation SOUTHERN WATCH. Upon his return, he moved to the Operations Division at the Command as the Chief, Business Management Office and joined the Air Force Institute of Technology faculty in September of 2002. In 2004, he served at Kunsan AB, Republic of Korea as the Operations Flight Commander. In 2005, he started his PhD program at The Ohio State University and upon graduation in 2009 served as Director, Department of Engineering Management, The Civil Engineer School. From 2010 to 2011, he deployed to Afghanistan as the Officer-in-Charge of the Air Force Civil Engineer and the Environment $2.1 billion dollar design and construction program. From 2012-2016, he served as the Dean of the Civil Engineer School providing Professional Continuing Education to over 50,000 Air Force Engineers world-wide.  He assumed his current position in December 2016.