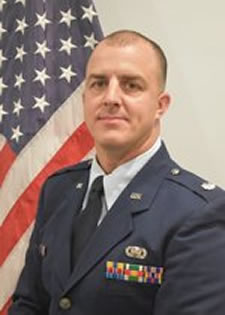 Lt Colonel Mike Zollars is an Assistant Professor of Aeronautical Engineering at the Air Force Institute of Technology (AFIT).  Lt Col Zollars entered the Air Force through the Reserve Officer and Training Corps (ROTC) at the Pennsylvania State University in 2003 where he earned his undergraduate degree in Mechanical Engineering.  He began his active duty career at Holloman AFB as a flight test engineer testing GPS capabilities.  After two years, he was accepted to the graduate school at AFIT and earned a Master’s degree in Aeronautical Engineering.  His follow-on assignment was at the Air Force Research Lab working on automated air refueling with autonomous vehicles. Next, he spent three years as a Master Instructor teaching Statics, Dynamics, and Strength of Materials at the United States Naval Academy before heading to Los Angeles AFB to work in the GPS program office.  While at LA AFB, he was accepted to AFIT and returned to WPAFB to earn his PhD in Aeronautical Engineering.  Before starting his faculty assignment at AFIT, he spent 2 short years at AFLCMC/EN as a special projects engineer focused on navigation solutions to include GPS and alternative navigation.  Lt Col Zollars’s research interests include dynamics, optimization and control systems for aeronautical systems, guidance and control algorithms, and stochastic estimation and control.