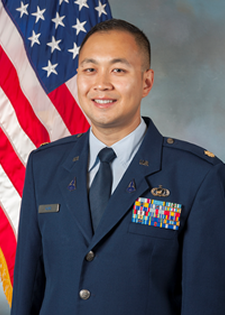 His assignments include High Performance Computing Program Manager at the NRO, flight test engineer for F-16, T-38, T-35A, and UV-18B, and communications systems officer at the 608th Air and Space Operations Center.  He was deployed to Camp Arifjan, Kuwait, as the NRO National Agency Representative, in 2018 and to Bagram Airfield, Afghanistan, as Lead Test Engineer to defeat radio-controlled improvised explosive devices in 2012.  He enlisted in the Air Force in 2005, received his Air Force commission through Officer Training School in 2007, and transferred to the Space Force in 2021.