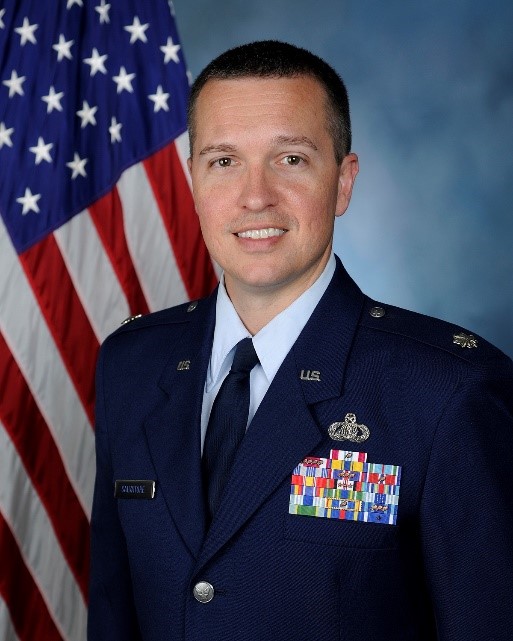 “I think working at AFIT will be interesting and expand my appreciation for the Air Force and all of the different things the service does,” said Salvatore.  “Personnel work  is centered on individuals and I am here to help ensure everybody is taken care of so that they can get the mission done.”

Establishing systems and improving communication processes are goals Salvatore has for his time at AFIT.  “It is what I have tried to do wherever I have gone,” said Salvatore.  “The Air Force has taken huge cutbacks since I have been in.  I have been through three force shaping events already, so we are constantly having to do more with fewer, and the way to do that is to automate as much as you can, decentralize the work, and empower people at lower levels.”

Born in Pahokee, Fla., Salvatore was a member of the first graduating class of his high school’s Air Force Junior Reserve Officer Training Corps.  That led to a scholarship and a commission through AFROTC at the University of Florida in 2000 having earned a Bachelor of Arts degree in history.  In 2009, he earned an MBA from the University of Phoenix.

His experience in AFJROTC was leveraged for his first active duty assignment working at the AFJROTC headquarters at Maxwell Air Force Base, Ala. where Salvatore was the chief of AFJROTC assessments inspecting current units and recruiting new high schools into the program.

As a personnelist, Salvatore has been stationed at numerous stateside bases as well as in Korea, Qatar, Afghanistan, and Turkey.  He has been responsible for customer support, personnel readiness, and equal opportunity initiatives at a civil engineering squadron, and the AF Academy.

At Air Force Global Strike Command, Salvatore served as an executive officer for the manpower & personnel directorate and as commander of the AFGSC headquarters squadron.  He also has experience leading AF Services organizations as an operations chief and then deputy director at Joint Base San Antonio in Texas.

Prior to coming to AFIT, Salvatore served as the commander of the 425th Air Base Squadron located at Izmir Air Station, Turkey providing mission support for the NATO Allied Land Command Headquarters as well as six other associate units operating in Izmir, Turkey.

Being able to mentor Airmen to realize their full potential and ensure their skills and interests are properly matched to an assignment are highlights of his career.  “You might have somebody who is really great at their job, but they are not doing some of the other things like school, so when they go up for promotion or awards they don’t do as well,” said Salvatore.  “Then you have just lost this great Airman because you didn’t make sure they were well rounded.  It’s really important to directly mentor and help people to do the things that make them better, and make the whole force better.”

Inspiration for joining the military came from Salvatore’s father who served in security forces for a tour in the Air Force in the late 1960s.  That time provided direction to his father’s life leading to a career in law enforcement where he was one of the youngest police chiefs in Palm Beach County, Fla. “Because of the skills and opportunities he gained, our entire life changed based on that one tour,” said Salvatore.

Salvatore met his wife while they were both stationed in Alaska.  She has since left active duty and they now have 2 children.

In his free time, Salvatore enjoys writing and has self-published several books.  His preferred genre are fantasy novels, but Salvatore started writing and illustrating children’s books inspired by his kids that has grown into a four-book series called There Are No Monsters!  “I was hanging out with my kids and they were worried about monsters in the closet,” said Salvatore. “I would tell them that are no monsters in the closet, there are no vampires in the bathroom, and there are no sharks in the garage.  We made a joke out of it and that became the series.”