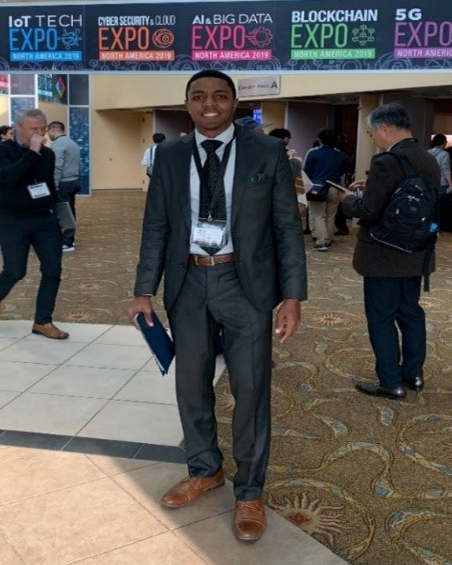 Capt Nick Spivey, AFIT EWI Fellow at FedEx, attended the 2019 North American Blockchain Expo in Santa Clara, California where he learned how use of blockchain technology could help the military make decisions faster in a competitive environment (Courtesy Photo).

SANTA CLARA, CA. – If you’re looking for the premiere education opportunity with a “boots on the ground” approach beyond traditional classroom instruction, the Air Force Institute of Technology (AFIT) Education with Industry (EWI) program is for you. EWI assigns active duty members to various companies to further a long-standing relationship and atmosphere of collaboration and learning between the Air Force and industry. EWI fellows can benefit from firsthand observations of cutting-edge technologies that energize both public and private sectors.

Blockchain is regarded as one of these emerging technologies that is transforming business practices in many industries. Capt Nick Spivey had the opportunity to learn more about this technology and its applications by attending the 2019 North American Blockchain Expo in Santa Clara, California. As the Logistics Readiness Officer assigned to FedEx, headquartered in Memphis, Tennessee, he focused on the value of blockchain in logistics and sustainment.

The two-day Expo was a large-scale event comprised of five different tracks, each showcasing new technology markets. Specifically, the tracks include blockchain, cybersecurity and cloud, 5G, artificial intelligence (AI) and big data, and internet of things (IoT). The conference provided education, demonstrations, and exchanges from over 6,000 attendees spanning industries such as logistics, health care, manufacturing, finance, and insurance. The audience covered a full spectrum of business stakeholders from first time owners, to consultants, to Vice Presidents of Fortune 500 corporations.

Capt Spivey attended sessions covering the Blockchain in Transportation Alliance, blockchain implementation and return on investment, smart logistics and connected fleets, blockchain solutions, and monitoring your blockchain. One of the reoccurring themes surrounding blockchain, is educating the public on the truth about the technology. Many people think it’s synonymous with Bitcoin. However, blockchain can be defined as a distributed ledger of individual data records, time and date stamped, and maintained using code. Bitcoin is only one application of the technology. The concept of blockchain is to record many blocks of data, each with a unique identifier, forming larger chains of data, in an environment where authenticity, traceability, transparency, and immutability are valued. Many corporate leaders see this technology as positively “disruptive”, not because it is malicious in nature, but because it fundamentally changes the way many goods and services are provided to consumers. In many business models, it removes the need for a “middle-man” for transaction exchange.

Another major takeaway that became evident, was the competitive advantage generated when blockchain is applied with IoT systems or AI. One demonstration was the opening and closing of a microwave sized safe; the same type of safe residents utilize at home to secure passports, jewelry, and other valuables. Through the use of IoT, transferring data from machine to machine, the safe was opened, locked, and unlocked through a cellphone app. This same app displayed every lock, unlock, open, and closing event as a time & date stamped record using blockchain. The chain even recorded who initiated each event and from what device.

In the eyes of a logistician, the implementation of blockchain has potential to benefit many processes within the military. Imagine North Atlantic Treaty Organization partners being able to overcome shortfalls in information system interoperability and information sharing by exchanging vehicle and fuel data via blockchain. This in effect equips Commanders with the information they need to make informed decisions faster in a competitive environment.

When discussing blockchain at a CoinDesk Consensus in 2018, FedEx Founder and Chief Executive Officer, Fred Smith, stated “if you are not operating at the edge of new technologies, you will surely be disrupted…” (Zhao, 2018). He went on to say, “when you stop innovating or when you stop embracing change, you are really in the process of commoditization at best and extinction more probably” (Zhao, 2018). This all ties back to the criticality of the EWI program. It provides the Air Force invaluable insight into means to sustain a competitive advantage, capitalizing on best business practices and innovation. Strategically, it advances instruments of national power that set our Nation apart by nurturing the partnership between industry and government.