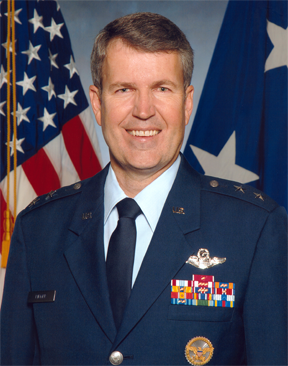 Major General Jeffrey Riemer entered the Air Force in 1974 after graduating from the University of Florida ROTC program.

As the top graduate from his pilot training class, he shared his knowledge of flying by mentoring many of his classmates and conducting endless tutoring sessions.

He initially served as an F-4C Wild Weasel pilot at Kadena Air Base in Japan before being assigned to the Air Training Command where he was the top graduate from T-37 instructor training and the Instructor Pilot of the Year.

He was an F-16 acceptance test pilot at General Dynamics where he was selected to attend AFIT and Test Pilot School.  He graduated in 1984 with a master’s degree in aeronautical engineering.  As a distinguished graduate of both schools, he remained at the Test Pilot School as an instructor and continued his experimental test pilot duties with the F-16 Combined Test Force.

General Riemer has served in numerous positions within the test and acquisition community. He served in the Office of the Secretary of Defense as a military staff assistant for developmental testing of aircraft and air-to-air missiles.

He has commanded the 4953rd Test Squadron, Air Force Security Assistance Center, and Air Armament Center.  His last assignment as active duty was the Air Force Program Executive Officer for the F-22 where he was responsible for all acquisition activities -- a $70 billion program with 1,000 suppliers in 44 states.

General Riemer is a command and test pilot with 3,000 flight hours in more than 40 different types of aircraft.
He is a true servant leader.  He has consistently modeled the way by teaching numerous leadership and balance scorecard classes, and mentoring peers and subordinates in applying innovative thinking to problem solving.

He established shadow programs where he would invite individuals from all levels of the organization, especially the junior staff, to spend the day with him to get a better feel for how leadership thinks and what they spend their days doing.  He even reversed the process and let people in his organization teach him what they did, in what were called emersion days.  General Riemer takes pride in taking care of his people by working hard to ensure they receive the training, and mentoring to continually advance and grow.

In 2012, he earned a doctorate of education in educational leadership from Argosy University Chicago.

He currently serves as the Chief Operating Officer for InDyne, Incorporated where he is responsible for operations and developing and implementing strategic initiatives. His areas of expertise include Enterprise Management, Technology and Science, Program Management, Test and Evaluation, Lean Six Sigma, and Knowledge Management.