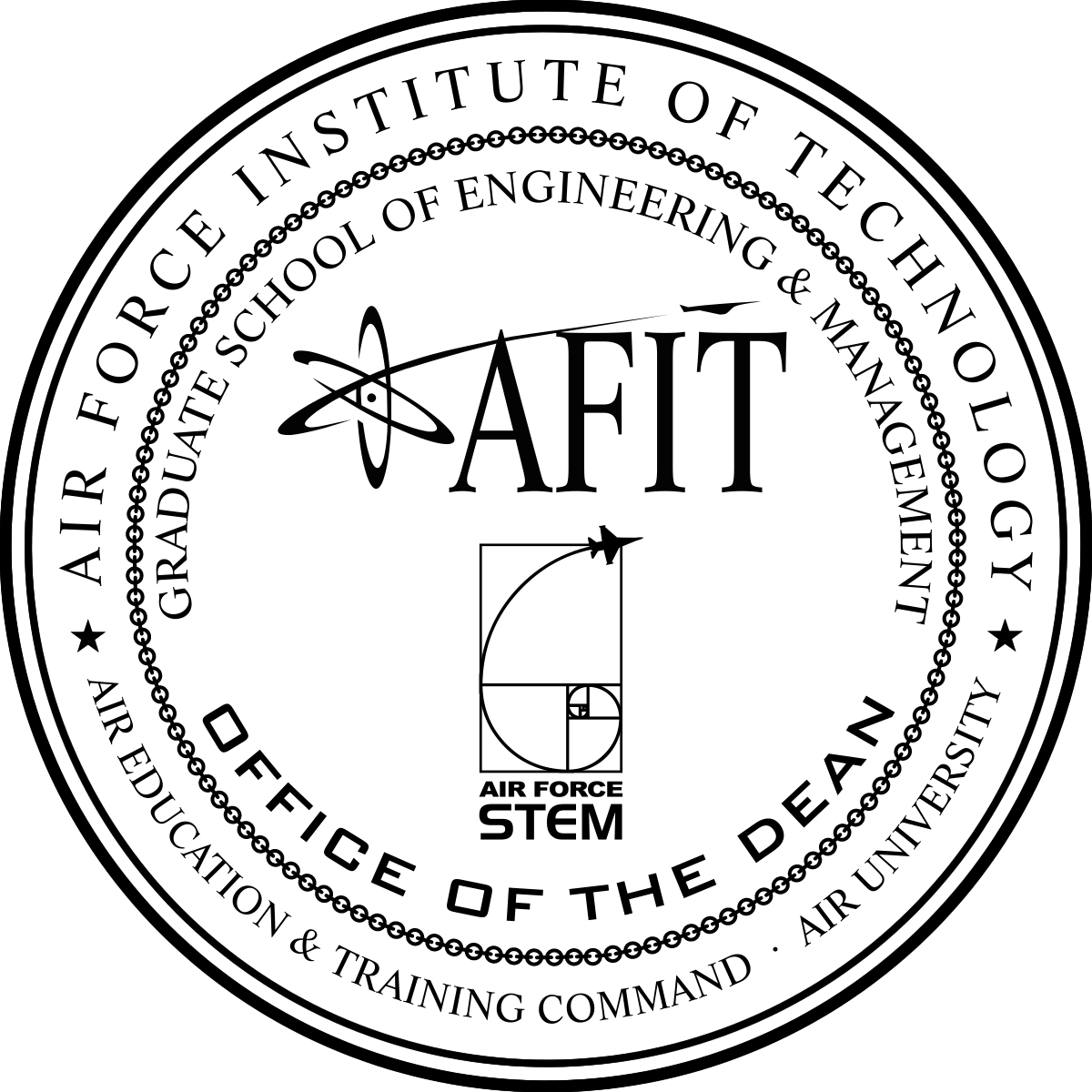 The Air Force Institute of Technology’s Graduate School of Engineering and Management completed the academic year 2019-20 promotion and tenure cycle.  Seven faculty members underwent a rigorous evaluation of their teaching, scholarship and service resulting in a promotion in academic rank.  Cumulatively, the seven faculty members have more than 300 publications, advised more than 165 students, and earned nearly $7M in sponsored research funds.

Dr. Adedeji Badiru, dean of the Graduate School of Engineering and Management said that the annual P&T evaluation process provides an opportunity to reaffirm the quality of faculty in carrying out the mission of AFIT in serving the needs of the Air Force.  “These successful applicants have demonstrated the value of an AFIT education by strategically integrating teaching, research, and Air Force consultation. I am proud of their accomplishments and I look forward to their future contributions to the advancement of graduate education at AFIT,” said Badiru.

“Our promotion and tenure evaluation process is built on a rigorous evaluation of each candidate in order to identify those of such high quality as to merit academic promotion,” said Dr. Christine Schubert Kabban, Faculty Council President for the Graduate School.  “I am proud and honored to serve along my fellow faculty and, in particular, those newly promoted as we seek to fulfill our graduate school mission.”

Dr. Julie Jackson earned promotion to Professor of Electrical Engineering within the Electrical and Computer Engineering department.  Jackson joined the Graduate School in 2009 following receipt of her Ph.D. from The Ohio State University.

Jackson’s service record to the Department, the Institute, and the electrical engineering professions include serving as Faculty Council Secretary, department representative to the Faculty Council Doctoral Committee, department Ph.D. Coordinator, two faculty hiring committees, radar sequence curriculum chair, and chief advisor of Tau Beta Pi Ohio Eta Chapter.  She founded the “Women in Radar” lunch at the Institute of Electrical and Electronics Engineers Radar Conference, which has now had six successful events and has performed more than 220 journal and conference reviews.

Dr. Brian Lunday earned promotion to Professor of Operations Research within the Operational Sciences department.  Lunday first joined the AFIT faculty in 2013 as an Assistant Professor while serving as an active duty Army officer.  He served for 24 years in a variety of leadership, combat engineering, military planning, and educational assignments.  He was hired as a civilian faculty member in 2016 and awarded tenure the following year.  He earned a Ph.D. in industrial and systems engineering from Virginia Polytechnic Institute and State University in 2010.

Lunday has published 38 archival journal articles, 23 of which are in what are considered top-tier, and six in the top journal in his field. He is a sought-out academic advisor having advised four PhD students and 22 master’s students.

In the classroom, Lunday receives high marks from student evaluations, even while teaching the harder mathematical optimization courses in the operations research curriculum. He has received the 2019 Professor Ezra Kotcher Award, the 2017 Faculty Excellence Award from the Southern Ohio Consortium of Higher Education, and the 2013 Leslie M. Norton Teaching Excellence Award from the AFIT Student Association.

Lunday is an active and engaged member of the AFIT faculty, the operations research professional and research community.  He is currently vice president and president elect for the Institute for Operations Research and Management Science-Military Applications Society and will serve a two-year term as president.

Dr. John McClory earned promotion to Professor of Nuclear Engineering within the Engineering Physics department.  He earned a Ph.D. from AFIT in nuclear engineering in 2008 and then joined the AFIT faculty while serving as an active duty Army officer.  McClory served first as an armor officer and then a nuclear and counter-proliferation operations officer. He served in various assignments in the U.S., Europe, and the Middle East; including service during Operation Iraqi Freedom and as an Assistant Professor of Physics at the United States Military Academy.

McClory has more than 14 years of classroom teaching experience at the undergraduate and graduate levels covering a variety of subjects including basic physics, mathematics, nuclear physics, nuclear instrumentation, nuclear weapons effects, and radiation effects on electronics. He has taught most of the AFIT nuclear engineering courses, 37 course offerings to 906 students.  He is an excellent instructor and has a very successful record mentoring AFIT graduate students, serving as the committee chair for 36 master’s and 17 PhD students.

In addition, McClory developed and has directed the Nuclear Weapons Effects, Policy, and Proliferation graduate certificate program since 2013 which is offered via distance learning for Air Force Global Strike Command personnel.  This successful program has had more than 500 graduates in the past six years.  McClory has also served as the Curriculum Chair for the Nuclear Engineering Program since 2018.

He has 90 refereed publications, 53 in open source archival journals and 37 in limited distribution publications of the DoD.  He and his students present in the restricted annual Hardened Electronics and Radiation Technology Conference and have publications in the associated peer-reviewed Journal of Radiation Effects, Research and Engineering at ITAR or classified levels.

McClory’s research in radiation effects on electronic devices and materials, radiation detector development, and nuclear weapons effects has been lauded by DoD customers. He has brought in more than $2M of sponsor funding and manages $350,000 per year as the director of the NWEPP program.  He is also an Air Force Technical Applications Center Endowed Term Chair Professor for Materials.

McClory has served the Institute in positions on school level committees including the academic standards, faculty research, doctoral (Chair), and the awards committee.  He has served the greater nuclear engineering community and the DoD nuclear enterprise by serving on review panels, chairing conference sessions, and reviewing proposals for DoD and DoE funding agencies.

He was awarded the Bronze Star Medal in 2006, the Military Officers Association of America AFIT Outstanding Military Professor in 2010; the Dr. Leslie M. Thornton Teaching Excellence Award in 2011; the Military Legion of Merit in 2012; and the Dean's Distinguished Teaching Professor Award in 2019.

Dr. John Elshaw earned promotion to Associate Professor of Systems Engineering with tenure within the Systems Engineering and Management department.  He is a graduate of Purdue University with a PhD in management specializing in organizational behavior and human resource management. He joined the AFIT faculty as a military member in 2008, and became a civilian faculty member in 2013 upon retirement from active duty in the Air Force. In prior military assignments, he served in various capacities associated with space and missile operations.

Elshaw has published 11 refereed journal articles, 1 book chapter, and 12 peer-reviewed conference papers.  He has received numerous research grants, with direct responsibility for over $380K of research funding. He has advised 24 students as thesis chair, and 37 additional students as a committee member across all department programs.

Elshaw is a member of the Academy of Management since 2006 and a reviewer for the Journal of Management in Engineering and the IEEE Transactions on Computational Social Systems. Together with co-principal investigators, Elshaw received the 2016 Best Track Paper – Safety, Human Factors, and Ergonomics at the Industrial and Systems Engineering Research Conference.

Lt. Col. Andrew Geyer earned promotion to Associate Professor of Statistics with military tenure within the Mathematics and Statistics department.  In 2014, Geyer graduated from AFIT with a Ph.D. in Applied Mathematics then joined the faculty.  He teaches graduate courses in applied probability, statistical analysis, and design of experiments. He has served as the researcher advisor for three doctoral and 11 master’s students.

Geyer is a member of five professional societies and serves as the vice chair and chair-elect for the committee on probability and statistics for the American Meteorological Society.

Lt. Col. Andrew Hoisington earned promotion to Associate Professor of Engineering Management with military tenure within the Systems Engineering and Management department.  He has 19 years of active duty experience in civil engineering and education. He received a doctorate degree from the University of Texas at Austin in environmental engineering in 2013.  In base level civil engineering assignments, he has managed over $400M in construction projects and led two flights, has three short tours, and deployed twice.

Now in his third year at AFIT, Hoisington has taught 14 unique courses mostly focused on infrastructure asset management. He led the graduate engineering management program and now serves as the curriculum chair.  He also holds appointments with the University of Colorado Anschutz Medical Center in the Department of Physical Medicine and Rehabilitation and the Veteran Affairs Rocky Mountain Mental Illness Research Evaluation and Clinical Care.

He has advised seven master’s theses, served on committees for two PhDs and 11 masters students, and led 13 undergraduate researchers. His dedication to education and students has been recognized in awards including the Society of American Military Engineers National Educator of the Year, USAFA Outstanding Academy Educator, and the AFIT Military Officers Association of America Outstanding Military Instructor.

To date, Hoisington has 21 peer-reviewed journal articles, one book chapter, five conference publications, six distinguished lectures, and 64 non-peer reviewed articles. Google scholar notes his peer-review work has 347 citations and he has h-index of 10.

Hoisington is the PI or co-PI for nine funded projects and successfully partnered AFIT with the Air Force Civil Engineering Center for the first long-term support of the graduate engineering management program in over a decade.

Hoisington is one of four founding members of the Military and Veterans Microbiome Consortium for Research and Education, providing research direction and technical guidance on microbial sampling, sequencing, and analysis. He has served roles in the Air Force Research Laboratory 2030 research initiative, the Department of Defense Tri-Services Microbiome Consortium, the 88th Air Base Wing’s institutional biosafety committee, and the Graduate School’s facility research council.

Nykl has taught 15 course offerings to 247 master’s and doctoral students. He developed a new course on information visualization to help students conduct research in vision-based navigation.  He has advised 11 master’s students, four of which were distinguished graduates, and one earned the prestigious AFIT-level Polk Award recognizing student research that has made a significant contribution toward strengthening the nation’s industrial defense base.

Nykl’s service record to the Department, the Institute, and the electrical engineering/computer science professions include serving as program committee and technical reviewer for the International Symposium on Visual Computing, national judge for the Collegiate Inventor’s Competition, journal reviewer for the American Institute of Aeronautics and Astronautics’s Journal of Guidance, Control, and Dynamics as well as the Journal of Defense Modeling and Simulation, AFIT Information Technology Working Group member, TPS liaison, program admission reviewer for department inbound TPS students, and Software Release Review Board member.